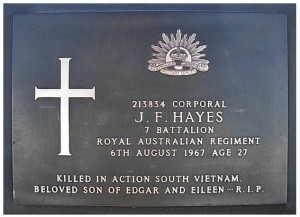 James Hayes was born in Goulburn, in the state of New South Wales, Australia, on the 24th November 1939

His service in Vietnam included:-
1 Australian Reinforcement Unit from the 13th June 1966 to the11th December 1966
7th Battalion, The Royal Australian Regiment from the 8th April 1967 to the 6th August 1967

… the fatal action in Vietnam …
Corporal James ‘Gabby’ Hayes died during the Battle of Suoi Chau Pha, in Phuoc Tuy Province on August 6 1967. Five other Australian soldiers from A Company died and 15 were wounded during this battle.

In his Will he left money to the Battalion Sergeants’ Mess for the drinking of a toast each year to the Infantry Soldier on the Battalion’s birthday. CPL Hayes also set aside money to buy a trophy for competition at indoor sports between the sergeants and corporals of 7 RAR..  The ‘Gabby Hayes’ Night as it become known, is a continuing tradition in the Battalion and within the 7RAR Assn. 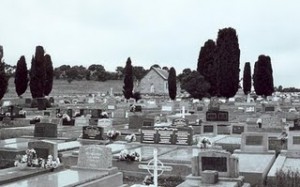