Robert Perrin was born in Melbourne, in the state of Victoria, Australia, on the 2nd September 1945.

He served in Vietnam with the 7th Battalion, The Royal Australian Regiment, from the 8th April 1967 to the 2nd February 1968

… in Vietnam …
On 2 February Private Bob Perrin and another soldier were being returned to B Company by helicopter.
They needed to be winched in as the terrain was too rugged for a landing. Private Perrin was the first to be
winched. He was about 5 m below the helicopter when the wire cable started to part. The door gunner saw
what was happening and tried to throw Perrin a cable while drawing the winched rope back in. The cable
snapped and dropped Private Perrin about 20 m to the ground. He died immediately from a broken spine.
Private Chris ‘Simmo’ Simpson of 5 Platoon B Company said: ‘I was next on the winch and saw his broken
body removed from the company location. When he died we were numb and depressed for days’. 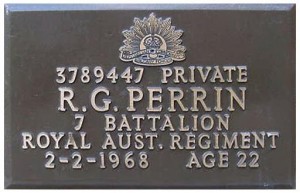