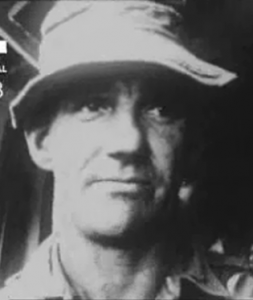 7 RAR was privileged to have Doug Clively as its first Regimental Sergeant Major, a position he held from 10th September 1965 to 21st August 1966. He was a much -respected soldier who set a fine example to this new battalion.

Herbert Douglas Clively was born in Perth on 8th July 1929, the son of Herbert and Eileen Clively. He enlisted in the army  (No 51316) . He became an experienced parachute jump instructor. He first saw action as a sergeant in 2 RAR in Korea from 17th March 1953 to 6th April 1954. As a warrant officer class two he served in South Vietnam with the Training Team from 12th July 1963 to 3rd September 1964 being posted to Saigon, to the Jungle, Mountain & Swamp School at Duc and with US Special Forces at Nha Trang.

He was a tough and able soldier: an enthusiastic leader with a touch of the larrikin.

The Regimental Sergeant Major had a mere seven days in which to prepare for the first unit parade for a visitor.  On 17 September, the Director of Infantry, Brigadier Bill Morrow, was greeted by a parade of a forlorn fourteen, all ranks.  It was only at the end of the month when twelve reinforcements arrived from the Infantry Centre that other ranks outnumbered officers in the unit.

He always regarded second-best as a failure. Doug was a very competent administrator and a patient and good-humoured teacher, expert in the working of his Sergeants’ Mess, ceremonial and discipline. His sense of humour frequently found an outlet in practical jokes.

When the Regimental Sergeant Major joined the battalion, the Commanding Officer quickly formed the opinion that he was a man of very high calibre and persuaded him to apply to become an officer.  When he obtained his commission, Colonel Smith successfully fought to keep him in the battalion as his Mortar Platoon Commander because he was reluctant to put a second lieutenant in that position. The CO also chose him as the OC of Y Company to carry out corps training for soldiers of the battalion: he let him choose his own NCOs for the job. The CO felt that this task was carried out in a very professional manner

He was promoted to temporary captain in November 1967. During the tour of duty in Vietnam he was used as a rifle company commander on one occasion when both OC & 2IC were away: the CO felt he did the job brilliantly. On return from the battalion’s tour of Vietnam he was posted to Southern Command at Victoria Barracks Melbourne.

After he retired with the rank of major, he settled at Clayton Victoria where he died on 12th October 1982 aged 53 years. He lays at rest in Springvale Cemetery, Victoria.