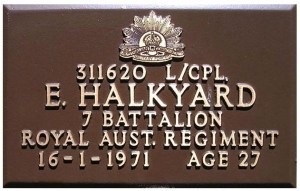 Eric Halkyard was born in Manchester, the United Kingdom, on the 29th March 1943.

In the early morning of 16 January, a half platoon lay–up patrol from 6 Platoon B Company, led by Second Lieutenant George  Wenhlowskyj, at a position on the northern edge of Nui Dien Ba, had heard noises and movement to their south. A little later a group of enemy, later estimated to be about fifteen strong, passed 30–40m from the patrol but the ambush was unable to effectively engage them because of the very thick vegetation. The next morning a group of twenty enemy passed the same location. The ambush was sprung when there were seven enemy in its killing ground, only 5 metres in front of the patrol. Corporal John Lawson described its springing:

“It seemed wrong if not unfair that the enemy were so unsuspecting. They entered the killing ground (what a cruel name). They were just having a stroll in each other’s company. I detonated the claymores, bodies went flying in a hideous fashion throughout the air. Bob Cusack’s machine gun opened up and then it jammed. Christ, why now? There was a loud explosion and then silence.
I quickly moved around the other pits. Eric was obviously dead and Buck had been wounded. The enemy who had not been caught commenced to remove the dead and wounded. We now had two machine guns out of action, one dead, one wounded, and for all we knew there was some evidence of a superior force to our rear who could now be starting to feel most angry. George in brilliant fashion was organising support. While it was arriving in the form of gunships and artillery, he handed me the M79 with orders to keep the enemy occupied. A casevac helicopter arrived for Buck and the body of Eric. A sweep was ordered through the killing ground. Another helicopter arrived for the enemy dead. Support artillery came whistling in, fascinating to feel its arrival.”

Five enemy bodies were found and there were at least seven wounded.

Unfortunately, one wounded enemy had thrown a grenade into a machine gun pit just before he died, killing Lance Corporal Eric Halkyard and wounding Lance Corporal Bill Rogers. Armoured personnel carriers were reacted to assist the contact but they were unable to penetrate the dense vegetation. From the large quantity of supplies being carried and the captured documents, it was deduced that this was a group of Viet Cong from the Long Dat District forces returning from a resupply mission. One enemy was identified as Tran Van Khoa, the Commander of the Military Proselytising Section of the Long Dat District Company, who was also on the Long Dat District Party Committee. He was a former secretary of the An Ngai Party Chapter.