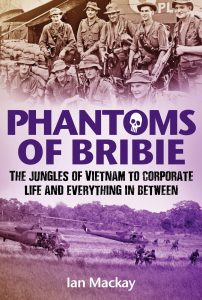 The Phantoms of Bribie is a highly readable blend of an engaging yarn and a fascinating portrayal of operational service in Vietnam as an infantry company commander, leading some 100 fine young national service and regular soldiers in close quarter jungle fighting.

Ian’s training within the SAS and operational service in Malaya served him well in Vietnam where he was a company commander of Bravo Company 6 RAR. During Operation Bribie he lead his outnumbered company’s desperate bayonet charge, followed by close quarter fighting, against a well dug in and determined enemy. This action sharply illustrated the courage, the battle discipline and the spirit of the well trained Australian combat infantryman.

On leaving the Army, Ian excelled in the Australian and international business worlds. A multi-talented sportsman, Rugby Union remained his passion, in which he performed to international level. Ian outlines the difference between leadership and management using many interesting and often humorous examples. Both qualities are vital for successful senior operatives in both civilian and military organisations. Most importantly, as Ian explains, a good leader must also be an effective decision maker and a good communicator.

This book is a tribute to Ian Mackay’s qualities as a battlefield commander, an international sportsman, a successful businessman and an entertaining author.