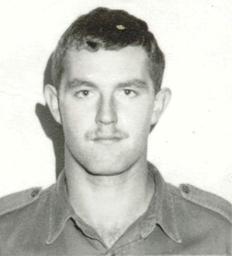 Neil Richardson was born in Sydney, New South Wales, Australia, on the 26th April 1948. He served in Vietnam with the 7th Battalion, The Royal Australian Regiment, from the 16th February 1970 until his death on the 27th August 1970

On 26 August, the Reconnaissance Platoon had been detailed to search for signs of enemy activity around the feature nicknamed the Ear,  midway between Dat Do and Xuyen Moc. It was so called because the shape of the map contours on a 1:50 000 map of the area were similar to an ear. The next day, the Platoon Commander,  Staff Sergeant Col Rowley, was selecting a night harbour position for the platoon 1 km south of the Ear at about 1615 hours. He had been leading for about 25 m when he sighted an enemy soldier going to ground behind a tree. He opened fire on the enemy and took cover. The Viet Cong returned the fire, wounding the scout (Private Ray Gladman) and the section commander of the forward section (Lance Corporal Neil Richardson). The forward section deployed and returned the fire. Enemy fire was now coming from the left, centre and right of this section. The second and third sections deployed into an assault and swept through the enemy position under Staff Sergeant Rowley’s command. The Platoon Sergeant (Sergeant Williams) and seven soldiers were detailed to care for the wounded. The assault group fought through a camp with accommodation for about fifteen men. While they were using spigot grenades to clear one of the huts, a further burst of fire detonated one of these grenades, wounding a further three soldiers – Private Pat Kelly, Private Neil Nitshke and Private Darrel Gillies – with the shrapnel.

Lance Corporal Neil Richardson died of his wounds in this action. 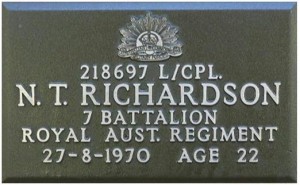