This month we remember Allan Lloyd 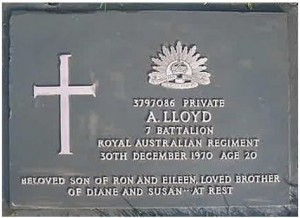 Allan Lloyd was born in Canberra, ACT, Australia, on the 6th January 1950.

He served in Vietnam with the 7th Battalion, The Royal Australian Regiment, from the 16th February 1970 until his death on the 30th December 1970

While the battalion (7RAR) was in Nui Dat (one of the permanent Australian bases), many other activities took place.
Private Allan Lloyd (6 Platoon B Company) wrote:

“Yesterday I went on a civil aid program, guarding a doctor and a dentist. They do a marvellous job over here  you know. You have to laugh when you see the kids getting needles. They cry and run everywhere. They are very sad to look at. They are under–fed, have sores and big fat bellies through malnutrition”.

6 Platoon had found a heavy and fresh track and were following it north. After a quick search through an abandoned bunker system the platoon pressed on along the axis of the track towards the Nui Kho. At 1030 hours they located a 155 mm unexploded artillery shell which had been tampered with by the enemy to try to remove the explosive. The sapper mini team with the platoon attached charges to destroy the round, and the platoon moved off out of the danger area. After listening for the demolition the platoon moved on, following the track which had turned to the east.
From the Viet Cong viewpoint, an hour before midday the loud demolition explosion some 500 m to the south of their occupied bunker system had alerted their local protection elements in the camp. Shortly after, the sentry post on the main entry track had reported a group of fifteen Australians cautiously paralleling the heavy footpad. None of the 26 bunkers, well camouflaged and in dense undergrowth, had been sighted by the approaching patrol. The sentries had withdrawn undetected. When it appeared inevitable that the Australians would find the camp they were engaged with heavy defensive fire. At 1113 hours the platoon came under heavy and accurate machine gun fire from enemy fighting in well constructed and camouflaged bunkers. The lead section commander, Corporal John Lawson, wrote:

“As the enemy gun was concentrating its efforts on Platoon HQ and the lead sections, Alan Lloyd ran ten to twenty metres just forward of those wounded and Bob (‘the Wog’) Cusack leaped between the wounded and myself. Allan immediately brought fire to bear and suppressed their ambitions to attack.
Lloydie was totally determined to deflect the enemies’ attention from his mates and they were now going to tangle with him and his gun. His ruthless effectiveness now brought the attention of the enemy lead elements. The AKs now found one of their targets. Lloydie had kept his gun firing in too long bursts. He was on my right and mentioned that he had burnt his hand on the hot gun barrel. This statement puzzled me and I looked at his hand. One of his fingers had the first and second joints shot away. I told him to move from the gun and we would swap weapons. As he rolled away he was shot again, this time in the leg above the knee. His single action forced a well prepared enemy to redirect its firepower, allowing the balance of us to regain our composure, to force the issue and to exploit the opportunity he created.

At one stage the platoon commander had one of his soldiers wounded in front of him and two behind. He dragged Private Allan Lloyd back and staunched the flow of blood from a severed artery. The other wounded were Privates Les Myers, Lloyd Harmsworth and Darrel Lockley. An Australian Dustoff was requested but, because of the danger involved, would not come in. A US Army Dustoff, however, accepted the risk and started to evacuate the wounded. Sadly, Allan Lloyd died on the Dustoff helicopter.

All the soldiers who died in Vietnam are commemorated by the Vietnam Memorial in Canberra and by trees planted for each of them at Bass Hill, Sydney, in August 1992. 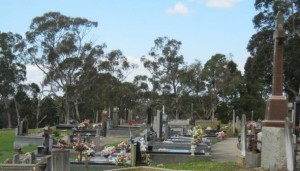