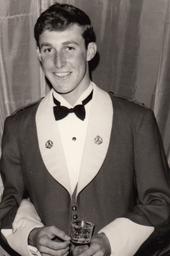 Robin Pothof was born in The Hague, The Netherlands, on the 16th June 1948

He served in Vietnam with the 7th Battalion, The Royal Australian Regiment, from the 4th March 1970 until his death on the 26th April 1970.

… the fatal action in Vietnam …
Sergeant Savage commanded another ambush patrol on 26 April. His Platoon commander, Lieutenant Rob Pothof, would have taken the patrol but he had developed a tropical ulcer on his leg. He agreed to do the job that Sergeant Savage would have done, that is to go out with the armoured personnel carriers that would drop the group off and on the way back to find a good spot for the platoon to ambush the next day. On the way back to the night defensive position the armoured personnel carrier

carrying Lieutenant Pothof hit a mine that had been made from 60lb of high explosive. Sergeant Savage saw the armoured personnel carrier ‘coming back to earth upside down’. He had the sad task of collecting the remains of  his platoon commander, whose place he might have taken, but for an ulcer. Four armoured personnel carrier crew members from B Squadron 3rd Cavalry Regiment were also wounded by the explosion of  this large pressure mine. This incident was the first mine fatality suffered by the battalion; sadly it was far from being the last. One of Lieutenant Pothof’s soldiers said: “I felt extreme sadness. We lost our leader after 2 months in country. Morale [in the platoon] slumped dramatically”.

The battalion padre, Father Keith Teefey, held a memorial service for Lieutenant Pothof on 30 April.  The moving ceremony was ended by his platoon sergeant who played the ‘Last Post’ on his own trumpet.  Another soldier in the platoon felt that this service marked the end of his grieving for his commander as his soul had been laid to rest.

His grave (Grave 263) is in RSL Lawn X of the Canberra Cemetery, ACT 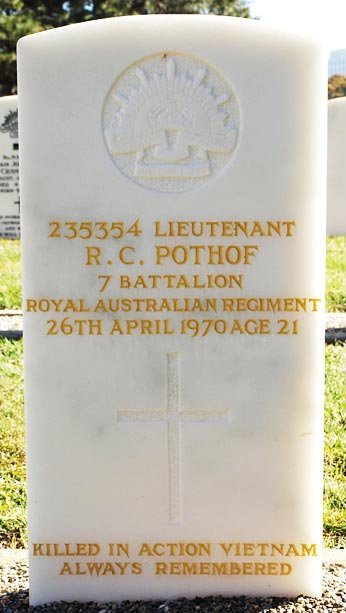