He served in Vietnam with the 7th Battalion, The Royal Australian Regiment,  from the 16th February 1970 until his death on the 3rd April 1970

… the fatal action in Vietnam …
On 3 April at 1735 hours, 9 Platoon C Company (commanded by Lieutenant Rob Pothof) contacted a group of five Viet Cong 19 km north–north–east of Ngai Giao. Three were wounded and the documents captured indicated that they were from the Signal Company of 274 Viet Cong Regiment. During the engagement, Private Ron Smith fired two full magazines at the enemy before he moved to a kneeling position without cover and was mortally wounded in the chest by enemy M16 rifle fire. His medals for his service in Vietnam were presented to his son on the battalion’s 25th anniversary gathering at Holsworthy in 1990. Throughout the tour in Vietnam, whenever any soldier of the battalion was killed in action or had died of his wounds, it became the custom to play the lament, ‘Flowers of theForest’, at dusk, casually but reverently. Corporal Robbie Cameron
piped this haunting tune at F.S.B. ANNE at dusk on the evening of Private Smith’s death.

His grave (Grave 4871) is within the Rookwood Cemetery in New South Wales and is located in Row 19 of the Church of England area. 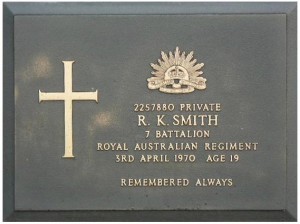