Today we commemorate the death of our mate Henry J. Stanczyk who was Killed in a Action in South Vietnam on 30 April, 1970 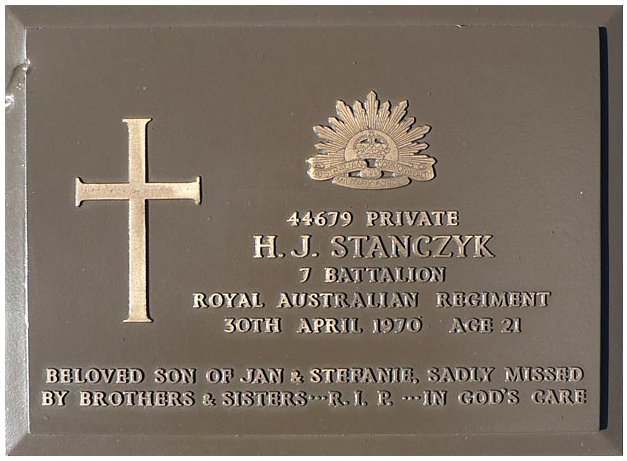 Henry Stanczyk, was born in Stade Germany, on the 26th November 1948.

He served in Vietnam with the 7th Battalion, The Royal Australian Regiment, from the 16th February 1970 until his death on the 30th April 1970

… the fatal action in Vietnam …
There was further action for C Company in the early evening of 30 April. The evening became pitch black, with visibility restricted to about 2 to 3 m. 7 Platoon was setting up its night ambush in open padi 1 km west of Phuoc Loi after it had moved about 1000m. Private Brian Webb, who was covering his section commander (Corporal Terry ‘Rags’ Halcroft) as he placed the claymores, saw seven enemy crouching behind a bund
observing the ambush. He fired on the enemy at a range of 10m. Corporal Halcroft was pinned down by the enemy fire and was only able to crawl back to the ambush after the application of extensive covering fire. The enemy were engaged with rifle, machine gun and 90 mm recoilless rifle splintex. (Splintex rounds, which were also available to artillery, fired clusters of many small arrow–shaped flechettes.) The enemy  returned fire with AK47s and RPGs. Private Peter Lloyd described the situation as being caught in the killing ground of a Viet Cong force. One AK47 round struck an M26 grenade and its adaptor on a rifle and exploded it. The explosion caused the death of Private Henry Stanczyk

His grave (Grave 922A) is situated within the Centennial Park Cemetery in South Australia and is located in Path 17 of the Derrick Gardens area.