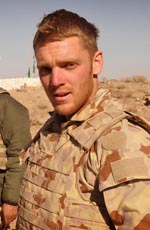 Corporal Mathew Hopkins, known as ‘Hoppy’ to his mates, was born on 27 August 1987 in Christchurch, New Zealand and arrived in Australia with his family in 1988. He was a Brisbane boy through and through and a passionate supporter of the Broncos and the Maroons. All Mathew ever wanted do was be in the Army and serve his country – he joined up as soon as he could after finishing his studies at Kenmore High School in Brisbane. He enlisted in the Australian Regular Army on 28 March 2005. After completing Recruit training he was allocated to the Royal Australian Infantry Corps. He was posted to the School of Infantry where he qualified as a rifleman after completing his Initial Employment Training on 9 September 2005.

He was posted to the 5/7th Battalion, the Royal Australian Regiment with effect 10 September 2005, where he fulfilled a number of junior soldier roles and qualified as a M113 Crewman Driver.

He remained with the 7th Battalion, The Royal Australian Regiment upon the delinking of both battalions and later qualified as a M113 Crewman Commander in November 2007. He was temporarily promoted to Lance Corporal in June 2007 and made substantive in April 2008. He was promoted to Corporal before his 21st birthday in August 2008.

Corporal Mathew Hopkins deployed to Afghanistan as a member of the Force Protection Combat Team (FPCT) known as Combat Team Tusk, serving with the 1st Mentoring and Reconstruction Task Force. Corporal Hopkins was a Section Commander with FPCT.
His mates in the 7th Battalion described him as a very professional soldier, but always a bit of a larrikin having a joke when the chips were down. Corporal Hopkins was always keen to get the job done which gave his subordinates something to emulate. He was a good leader and a good mate who would go out of his way to provide any assistance within his capacity.

Mathew was an approachable bloke with a genuine caring attitude for his soldiers. He upheld the Army values as a source of inspiration particularly courage and mateship. He was a soldier who led from the front, never from the rear and always looked out for his mates and most certainly for his soldiers. He was a keen sports player; he particularly enjoyed rugby within the Battalion and the competition within the Brigade.
Mathew was recently married to Victoria and was present during the birth of their son, Alexander

Corporal Hopkins was serving with the Mentoring and Reconstruction Task Force (MRTF) in Afghanistan when he was killed while conducting a patrol near Kakarak when he and his team were engaged by a group of around 20 Taliban on Monday 16 March, 2009.Twenty-one-year-old Corporal Hopkins was a valued member of the 7th Battalion, Royal Australian Regiment.Mathew was a fine, professional and courageous soldier.
He died while serving his nation and his sacrifice should never, ever be forgotten