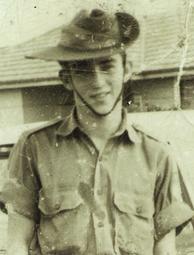 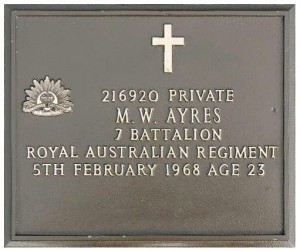 Mick Ayres was born in Sydney, NSW, Australia, on the 28th October 1944

“We moved into the bunkers where we were all pinned down by heavy fire to our front. There was one main bunker with what sounded like the equivalent of a fifty cal firing at us but above our heads. The trees were falling on us as  the heavy machine gun fire was having the same effect as a chain saw on the trees. We were lower than the bunker and the NVA could not depress the gun low enough to cause us casualties, other than Mick Ayres, who was a good fifty metres behind where we were pinned down when he was hit by a stray round in his chest.”

There was a particularly ugly aftermath to Private Ayres’ death. In a vicious gesture, anti–Vietnam war protesters phoned his parents and said, ‘He got what he deserved’. His parents have this despicable act imprinted on their memory to this day.

His grave is within the Rookwood Military Cemetery, NSW and is located in Lawn EE – Grave 576 B 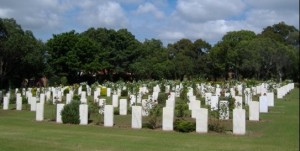