Alec Bell was born in Perth, in the state of Western Australia, AUSTRALIA, on the 28th March 1946

He served in Vietnam as a platoon medic with the 7th Battalion, The Royal Australian Regiment, from the 8th April 1967 until his death on the 29th January 1968

… the fatal action in Vietnam …
Private ‘Dinga’ Bell was platoon medic on the late afternoon of 29 January 1968. In the first few moments of the contact with the enemy the Platoon Commander, 2Lt O’Brien, and all the NCOs were wounded including Private Bell who had received a direct hit from a rocket. Even though shockingly wounded, Private Bell tried to get to the other wounded. When he could not move he gave orders to another soldier as to how to help them. Even when we finally got him on to the Dustoff stretcher, Private Bell was still giving advice as to the care of the other wounded. As he was lifted up through the trees the enemy opened fire again.
The Dustoff was forced to leave the area with Private Bell and stretcher hanging underneath. It was later learned that he was dead on arrival at the hospital. 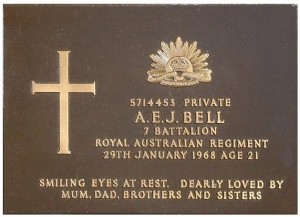