Edward Brophy was born in Gulgong, in the state of New South Wales, Australia, on the 10th July 1945.

… the fatal action in Vietnam …
Edward Brophy died during the Battle of Suoi Chau Pha, in Phuoc Tuy Province on August 6 1967.
Five other Australian soldiers from A Company died and 15 were wounded during this battle.

His grave (Grave 58) is within the Gulgong Cemetery (NSW) and located in Section C  of the Roman Catholic section. 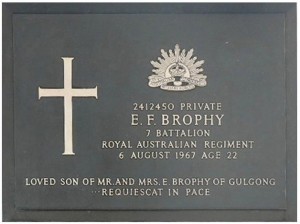