Bryan Cullen was born in Sydney, in the state of New South Wales, Australia, on the 26th October 1947.

Bryan Cullen, a champion cyclist and trainee accountant, had served as a clerk in Battalion Headquarters and had asked to be posted to a rifle company to see action. He was posted to D Company.

… the fatal action in Vietnam …
During an attack on an enemy bunker system Private Cullen was fataly wounded by a burst of enemy machine gun fire and died on the 27th November 1967. 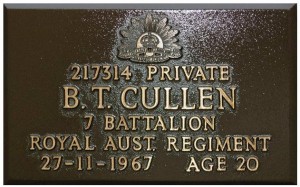