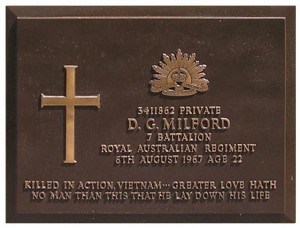 David Milford was born in Castlemaine, in the state of Victoria, Australia, on the 30th April 1945

He served in Vietnam with the 7th Battalion, The Royal Australian Regiment, from the 8th April 1967 to the 6th August 1967

… the fatal action in Vietnam …
Private David Milford was killed during the Battle of Suoi Chau Pha, in Phuoc Tuy Province on August 6 1967.
Five other Australian soldiers from A Company died and 15 were wounded during this battle.

Private Milford had missed out being called up in the National Service ballot.
Like a significant number of others, he had decided to join the Army as a Regular Soldier.

His grave (Grave 586) is located in the Methodist section of the Harcourt Cemetery in Victoria.