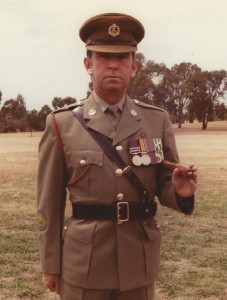 Enlisted in The Australian Regular Army 2 January 1961 in Sydney NSW. Transferred to 1 RTB on 8 Jan 1961 to commence Recruit Training.

On completion of recruit training at 1 RTB Kapooka was posted to Infantry Corps Training at Infantry Centre, Ingleburn, NSW. On completion of corps training the platoon in total was posted to 3 RAR based at Enoggera Barracks, Brisbane. At this time the RAR consisted of three Battalions, 1, 2 & 3 RAR. 3 RAR were the next battalion to be posted to Malaya in 1963. When I joined 3 RAR it was a Pentropic Battalion, which totalled around 1300 all ranks. On joining 3 RAR the new soldiers were required to do a six week induction course before they were allowed to be presented with the US Presidential Citation which 3 RAR was awarded for it involvement in the Battle of Kapyong during the Korean War 23/24 April 1951.

After many training exercises to prepare the Battalion for deployment to Malaya in July 1963, the Battalion was downsized from a Pentropic to a Tropical sized Battalion, about 900 all ranks. During July 1963 the battalion deployed to the newly established 28th Commonwealth Brigade Garrison Camp at Terendak outside the town of Malacca, located on the West Coast of Malaya.

This Brigade consisted of three Infantry Battalions, one Australian, one New Zealand and one British Battalion, plus all the supporting arms. The Brigade was situated on the coast with all the amenities to support the Brigade units plus some married quarters, sporting ovals, Shopping centre, Hospital and a Beach Club for each of the Ranks, OR’s, SGTs and Officers.

The tour was for two years during which time the battalion deployed to all parts of Malaya searching for and intercepting rebels. During early 1964 I attended a British Army PT course in Singapore, the course was for four months made up of soldiers from the Malaya, Ghurkha and British & Australian units. At the conclusion of the course I was recommended to attend the British Advanced PT Course at Aldershot in the UK but was not approved by HQ Austarm Singapore.

After Elections in Malaya in 1964 the Malayan Government approved the formation of the Confederated States of Malaysia which included the States of Sarawak and Sabah in Borneo. Indonesia objected to this as they held Kalimantan located in the Southern Borneo area.

As a result of this the Indonesians landed a number of paratroopers in the area of Kluang not far from the Terendak Garrison area. After this incident the Malaysian Government deployed troops to Sarawak to defend their border area with Indonesian Kalimantan. They also sought support from the British and Australian Governments, which was approved. In February 1965 3 RAR deployed to Kuching and then to Krokong, This area became the rear base for the Battalion and companies deployed to separate forward operational bases on the border area.

During the period February to July the Battalion was involved in many contacts, the battalion suffered a number of members killed in action. As a Section Commander with 2 Pl A Coy, on 15 Jun 1965 The Platoon initiated an ambush with a large force of enemy, this action saw the Platoon Commander being awarded the MC for the action.

On return to Australia in 1965 the Regiment was involved in the Vietnam War and the RAR saw the number of Battalions increased to nine, this action resulted the raising of 7 RAR which was made up of many of the single soldiers from 3 RAR, I was one of those soldiers. I arrived in 7 RAR on 29 Sep 1965 and was posted as Platoon SGT 4 Platoon B Coy, during our training in Puckapunyal we received our first intake of the National Servicemen that the Vietnam conflict initiated.

During the build-up of the battalion to prepare it for deployment to South Vietnam I attended a Mortar Course and transferred to Mortar Platoon as Section Commander. In April 1967 I deployed to Sth Vietnam with the advance party from 7 RAR, During 1967/68 I deployed with rifle companies as the Mortar Fire Controller with most of my bush time with C Coy. As a result of Lunar New Year, the now well reported TET offensive occurred, the TF deployed from Phuoc Tuy to Bien Hoa province as part of the overall protection deployment of all troops in SVN. Late January/early February 1968 C Coy was involved in a three day battle with the enemy resulting in the battle for a bunker system, this was later written about by Gerard Windsor in his book, All Day Long the Noise of Battle.

On return to Australia in March 1968 I was posted to 7 RAR Aust Component based at Holsworthy. I started my duties with 7 RAR as the CQ A Coy, as time progressed I attended my WO2 promotion course at Infantry Centre Ingleburn.

On return to the battalion I was promoted to WO2 and initially performed the duties of Course SM for a CPL promotion course. After the course I was posted to CSM B Coy. In January 1970 7 RAR deployed to South Vietnam for its second tour. After a couple of operations as CSM B Coy I was posted to Admin Coy as CSM. Later when the battalion moved its operational base forward to the Horseshoe I moved there as CSM Horseshoe. During this tour I was advised that on return to Australia I would be posted to The Royal Military College as a WO2 Instructor on the Infantry Wing at RMC.

On arrival at RMC just prior to ANZAC Day 1971 I was introduced to the world of the Officer Cadets who graduated to all corps of the Army. As Vietnam had concluded the size of the ADF was reduced in numbers so many postings lasted longer than had been the case during Vietnam. During 1975 I was selected to attend the RSMs’ course at Infantry Centre Singleton. Over Christmas 1975/76 I took a trip overseas, on return to RMC in 1976 I was advised that D Inf was keen to get in touch with me. On contacting the officer responsible for postings other ranks I was informed that I was to be posted to 3 RAR as The RSM located at Woodside in the Adelaide Hills area. I took up this posting in Jun 1976.

During my tour as RSM, training continued at an intense pace and in 1977 the Battalion deployed three companies to the Rifle Company Butterworth Base in Malaysia, one after the other. In July 1977 a company group of regulars and CMF soldiers totalling 150 deployed on AUSTCAN Bond exchange with the Canadians. During this deployment 3 RAR made contact with 3rd Bn PPCLI for the first time since their combined involvement in the Battle of Kapyong, Korea in 1951.

In 1978 I was posted to Infantry Centre Singleton as the Wing Sergeant Major of the Warrant Officer Wing. After two years I was posted as the RSM 1 RTB Kapooka, this was a very rewarding posting. During this posting the Director of Infantry cleared me for promotion to Captain as a PSO, (Prescribed Service Officer). On accepting this promotion I was posted to Singleton in 1983 as the 2IC Depot Company, The Inf Corps Training Company. I spent one year in this posting after which I took up the posting as the SO3 Pers on HQ Inf Centre.

After this two year posting I was posted to back to RMC as the SO3 Ceremonial, this was a very rewarding posting, this involved organising the ceremonial side of all activities at Duntroon.

In 1987 after my two year posting at RMC I was promoted to Major and took up my posting as SO2 OR Management in D Inf, Campbell Park Offices Canberra. This posting involved the career management for all Infantry soldiers from the rank of CPL qualified to SGT and all ranks up to WO1. This involved travelling to all units where Infantry men were posted to conduct career interviews with all those soldiers whom I managed.

In January 1990 I was posted as the SO2 MS, Headquarters PNGDF, Murray Barracks, Port Moresby. This provided me the opportunity to travel to most areas in Papua New Guinea and surrounding Islands.

On return to Australia I was posted as the OC Admin Support Wing at RMC. During my final three years in the Army I enjoyed my third posting to the Royal Military College. I was discharged on 31 March 1996 after 35years service.

I was awarded the OAM for service to the veteran community and currently have completed my 17th year as the XO of 7RAR Association.