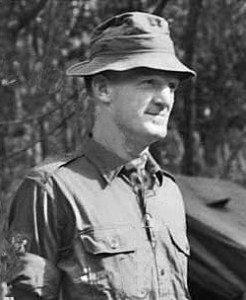 WO1 Alexander Patrick Thompson was born in Hobart in 1933.  ‘Blue’ Thompson was called up for National service in 1951 and in the same year enlisted in the Regular Army and was posted to 1RAR. He served in Korea with 1RAR and was then posted to the HaraMura Battle school in Japan as an Instructor.  He returned to Australia in 1954, initially posted to 18 National service Training Battalion then, after promotion to WOII, moved to the 40th Infantry Battalion and in 1958, to 2RAR as CSM. He served in Malaya with 2RAR during 1961 and 1963 and on return to Australia in 1963 was posted to the SASR as Squadron Sergeant Major. In 1965 he served in Borneo with the SASR.  Once again he returned to Australia and in 1966 was promoted and posted to 7RAR as RSM. He served during the first tour of the Battalion in Vietnam in that appointment and after returning to Australia was commission as Lieutenant and posted to 2RNSWR. In 1970, after promotion to Captain, he was once again posted to 7RAR, serving as OC Support Company on the second tour of Vietnam. On return to Australia he was posted as OC WO Training Wing at the Infantry Centre and in 1974 was posted back home to Tasmania as Staff Captain ‘Q’. In 1975 he was posted to 6 Cadet Brigade and in 1976, promoted to substantive Major as Assistant Commander. After serving for 27 years and having seen operational service in Korea, Malaya, Borneo and twice in Vietnam, Major A.P Thompson retired from the Army in 1978