In 1961, an Englishman, a Scotsman and an Irishman enlisted in the Australian Army at Australia House London. The first was Thomas (Jordie) Wilkinson, who enlisted on 13 March 1961, then Edward Wright (Jock) Isaac on 30 March 1961 and finally Thomas Henry (Paddy) Craig on 8 September 1961.  All had previous service with the British Army, Jordie in the early 1950’s, Jock with the Argyll and Sutherland Highlanders and Paddy with the Irish Guards. Jock had also seen active service in Cyprus.

All three followed similar paths, posted to the Infantry Centre then to 3 Battalion Royal Australian Regiment and then deployed to Malaysia with the battalion. All three served in Borneo, Jock and Jordie served in B Company and Paddy in D Company. The nature of the deployments in Malaysia and Borneo were not widely discussed at the time as the operations in Borneo were classified for a number of years. However, these operations were very much company based and relied upon extensive patrolling and ambushing.  Jock was a member of an ambush led by Pat Beale where they ambushed three Indonesian boats killing fifteen and Pat was awarded a Military Cross. During their posting to 3 Battalion both Jock    and Paddy were promoted to Corporal.

Upon completion of their tour of Malaysia and the Battalion returning to Australia all three were posted to 7 Battalion Royal Australian Regiment in Puckapunyal.  Jock was soon posted to 3 Training Battalion in March 1966 only to return to 7 Battalion Royal Australian Regiment in February 1967. All three served in 8 Platoon C Company at some stage during the first tour of Vietnam.  Paddy was the platoon sergeant, Jock was a section commander and Jordie a section second in command for a short period. Jordie was the company storemen for the majority of the tour and on return to Australia was posted to 22 Battalion Royal Victorian Regiment and subsequently took his discharge. He died on 29 September 1990. 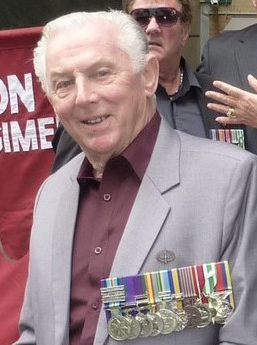 Jock Isaac upon return to Australia was promoted Sergeant. He was then posted to the Infantry Centre as a reinforcement and was subsequently to serve with 5 Battalion Royal Australian Regiment in D Company. Upon return to Australia he took his discharge only to reenlist in August and then saw postings to the Infantry Centre, Army Apprentices School and then back to 3 Battalion Royal Australian Regiment as Company Sergeant Major C Company, then 2 Training Group and discharge in December 1985. He was promoted to a Warrant Officer Class Two in 1975. Jock died on 3 July 2018.

Paddy Craig returned to Vietnam with 7 Battalion Royal Australian Regiment on their second tour as C Company, Quartermaster Sergeant. Upon return to Australia postings to Cadet Battalions and Melbourne University Regiment. He was then posted to the Royal Military College, Duntroon and finally back to Cadets and Melbourne University Regiment. He was discharged on 17 January 1985. He was promote to Warrant Officer Class Two in 1970. He died on 3 July 2018.

Jordie was the quite one of the three, he went about his work in an un-intrusive manner and with little fuss. Jock and Paddy had strong, assertive personalities, ideally suited to their demanding leadership roles. This contributed in positive ways to the many successful operations and contacts during their operational tours in Malaysia, Borneo and Vietnam. These qualities would also serve them and others well during their further service.

When one considers the aforementioned birthdates, enlistment place and date followed by their very similar service journeys and careers, and finally the time and dates of death, the question springs to mind; “Is all of this either a phenomenal coincidence or perhaps the guiding hand of their guardian angel” !!

All three remained close friends throughout their service in Australia and afterwards.

May they all Rest in Peace.