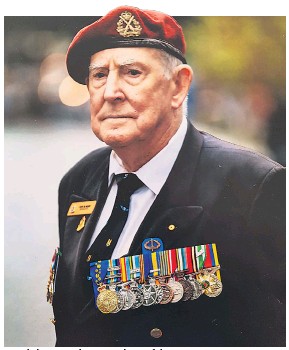 Obituary for Kenneth John Bladen AM

Among many other things, Ken Bladen was an infantry officer in the Australian Army. That, itself, is testament to his qualities and proclaims his dedication, leadership and sense of duty.

It is always hard and demanding work in the infantry, particularly as a young platoon commander. There was not a lot of glamour being an infantry platoon commander during anti-Communist terror operations in northern Malaya in 1961; but there certainly was a lot of satisfaction.

The long, drawn-out patrols, chasing an elusive enemy in steamy jungle, were often frustrating. But it was a wonderful way to learn the profession of arms and get to know your men.

After the SAS, Ken served with the Royal Australian Regiment. His service as an infantry platoon commander with the Regiment was in the 1st Battalion. From 1962 to 1963, he was Adjutant of the 2nd Battalion, at Terendak in Malacca.

On returning to Australia, Ken was posted to the newly raised 7th Battalion, at Puckapunyal Victoria. In 1967 the 7th Battalion went to war and Ken saw active service as a Company Commander in Vietnam.
Ken Bladen graduated from the Australian Command and Staff College, at Fort Queenscliff Victoria, in 1968 and was posted to Headquarters Western Command, in Perth, as a Staff Officer. Of particular pride to Ken during this posting was when he won the Queen’s Medal for being the champion shot in the Australian Army for 1969.

From 1971 to 1973 Ken was a tactics instructor at the Jungle Training Centre, in Canungra Queensland. This included a short detachment to the headquarters of the South East Asia Treaty Organization (SEATO) in Thailand.

At age 39, Ken was promoted to Lieutenant Colonel and appointed Commander Third Cadet Brigade in Victoria. Shortly after, in 1975, he retired from the Regular Army.

The Army ran deep in Ken’s veins and it was no surprise when he transferred to the Army Reserve in Western Australia.
His final retirement from the Australian Army was in 1984, having served a total of 30 years from 1954.

The Royal Australian Regiment motto is ‘Duty First’ and Ken lived by that motto throughout his life.

Ken’s first duty was to his family, to which he became patriarch. His second was to his country, for which he fought in Malaya and Vietnam and served diligently.

After leaving the Regular Army, Ken became involved in veteran affairs and was the State President of the Returned and Services League in Western Australia for three years. He was an Honorary Life Member of the RSL and was also appointed Honorary National RSL Vice President for Life.

He was awarded the Australian 2001 Centenary Medal and was recognized for his service to the veteran community in 2003, when made a Member of the Order of Australia.

Ken Bladen initially grew up in Victoria Park and went to Wesley College. He was recognized as an inaugural inductee in the Wesley College Gallery of Honour in November 2018.

After being at Wesley for only four years, Ken’s family moved to Guildford and he enrolled at Guildford Grammar School. Wesley’s loss was Guildford’s gain as he successfully represented Guildford Grammar in athletics, swimming, rowing and shooting.

Ken’s father, Bob Bladen, was a General Practitioner and his mother, Beth, a school teacher. He was the eldest of two sons and two daughters.

After leaving school, Ken worked on the wheat bins in rural Western Australia and then for Wesfarmers until the Army beckoned. In July 1953 he entered the Officer Cadet School, at Portsea Victoria, and graduated as a Second Lieutenant in June 1954.

Ken met Stephanie Hughes during a holiday at Coolangatta and they married in Sydney on 2 December 1955. They both came from military families. Ken’s grandfather served at Gallipoli and on the Western Front, as a padre, and Stephanie’s father was a prisoner of war on the Burma Railway. One of Stephanie’s brothers was an RAAF pilot and another an RAAF engineer.

Life for spouses and families of members of the Australian Defence Force is never easy. It is always a nomadic existence with regular periods of separation.

During 21 years of Regular Army service, Ken and Stephanie lived in 23 different houses. These were located in places as diverse as Brisbane, Perth, Penang, Malacca, Sydney, Puckapunyal, Queenscliff, Canunga and Melbourne.

Each house was made into a loving home and they were blessed with three wonderful daughters; Louise in 1957, Penny in 1961 and Emma in 1967.

There were long periods when Ken was on operations in the Malaya jungle, while Stephanie was in Penang and Malacca. While Ken served in Vietnam there was a year long separation from family.

There is no formula for coping with separation. There is, however, a wonderful support mechanism that grows at both ends of the separation. For the person on operational duty, great efforts are made to keep lines of communication with home open and, at the family end, very supportive welfare and liaison services are put in place.

Nevertheless, families suffer and it is always a challenge at both ends.
When Ken joined the Army Reserve, Stephanie could rightly be dismissive of wives of Reservists who complained that their husband had to go to Northam for a weekend parade.

They were a remarkable team, who worked hard to ensure that every difficulty placed in the way of their family was overcome.

Ken Bladen had a magnificent singing voice and performed with the Western Australia Opera and the Gilbert and Sullivan Society of Western Australia. His wonderful singing voice and skill on a piano made him a welcome performer at various functions and events, and family gatherings. He recorded his favourite songs on a compact disc and titled it “Songs My Father Taught Me”.

Lieutenant Colonel (Retired) Kenneth John Bladen AM was born on 8 July 1934 and passed away on 22 February 2019.

A piper led the procession to the chapel and the Sub Wardens of the State War Memorial provided an honour guard. A bugler played the Last Post and, after one minute silence, Reveille.

In one of the eulogies Ken was referred to as a “soldier’s soldier”. He was all of that and much more. He was a loving husband and father, and a champion in so many endeavours.

His widow, Stephanie, survives Ken along with daughters Louise and Emma, and son-in-laws John and Cameron. Ken and Stephanie’s third daughter, Penny, passed away in 2010.