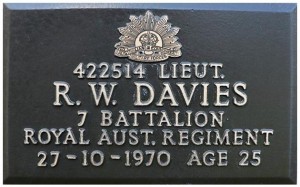 Rex Davies was born in Port Augusta, South Australia on the 2nd February 1945.

On 27 October there was a tragic clash between patrols from 2 and 3 Platoons of A Company. The clash resulted in the death of temporary Lieutenant Rex Davies, and the wounding of Private Arthur Holzhauser and Sapper P. Piromanski (a member of the attached engineer mini team). The incident was promptly subjected to a formal investigation which was carried out by the battalion Second–in–Command. He concluded that the clash had occurred as a result of a navigational error.

His grave is within the Stirling North Cemetery, south east of Port Augusta in South Australia