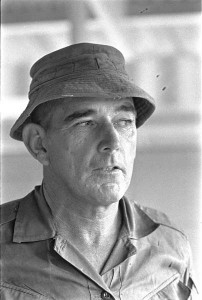 WO1 Reg Bandy was born in Subiaco, Perth Western Australia on 14 July, 1922 and joined the Army in 1940.  He trained with 11,000 other men in 1941 and was subsequently posted to an Armoured Reconnaissance Unit on the Australian mainland.  In 1943 all units were converted to Infantry to oppose the Japanese in New Guinea and WO Bandy was posted to a US Army Landing Unit in Finschhafen, New Guinea.  By 1943 he was posted to an Australian Landing Craft Unit and served up and down the New Guinea coast servicing other Army units for the remainder of the war.

After World War 2 ended he was posted to Moratai with the 67th Battalion which then became the 3rd Battalion, The Royal Australian Regiment. The Battalion trained for British and Commonwealth Occupation Forces (BCOF) duties in Japan where subsequently WO Bandy patrolled and helped clean up Hiroshima after the Atom bomb.

Early 1950 rumours of war in Korea initiated training for another war and by February of that year WO Bandy was at war again with 3RAR who had joined the UN Force attached to the British 27th Brigade along side the Argyll and Sutherland Highlanders and the Middlesex Regiment.

In 3RAR’s first 6 months in Korea they fought 7 battles, lost 100 KIA and 50 wounded.  WO Bandy was acting as platoon commander at the Battle of Kapyong and in his own words described it as “Not a nice place to be”.

In 1951 his tour of duty finished, he went back to Japan and then later, in December, to Australia where he was posted to 6 Recruit Training Company training reinforcements for Korea.

From 1953 to 1959 WO Bandy trained National Servicemen and CMF Officers and NCOs and then in 1960 was posted to Battle Wing Canungra as an instructor. In 1963 he was  posted to South Vietnam with the Australian Army Training Team where he worked with the South Vietnamese Rangers.  He is one of the very few Australians who were awarded the General Service Medal with Vietnam Clasp, the predecessor to the Australian Vietnam Medal

On RTA WO Bandy served as a Senior Instructor at the Infantry Centre and was then  promoted and posted as RSM, 11th Battalion, CMF in Western Australia.  In 1968 he was posted as RSM of 7RAR and took the Battalion back to South Vietnam in 1970 for both his and the Battalion’s second tour.

On RTA WO Bandy was posted as RSM Infantry Centre and then from 1972 to 1975 was RSM of Australia House, London.  On RTA he was posted as RSM Western Command and his last task as an RSM was to train the Royal Guard of Honour for the departure of HRH  Queen Elizabeth II and Prince Phillip from Perth Airport.

WO Bandy retired from the Army in July, 1977 having completed 37 years service.  He saw active service in three wars over multiple tours and beside the MBE was also awarded the Meritorious Service Medal and Conspicuous Service and Good Conduct Medal.  He was also awarded five foreign awards and three citations giving him a grand total of 25 medals, citations and awards.