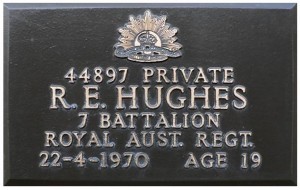 Bob Hughes was born in Goulburn,  in the state of New South Wales, Australia, on the 31st July 1950. Like many others, Private Bob Hughes ‘marched in’ to 7RAR’s Finschhafen Lines at Holsworthy to commence training within 7RAR, including specialty training, training exercises, and then Canungra, all in preparation for overseas service in Vietnam.

Hughsey travelled to Vietnam, along with most of the Battalion, on the HMAS Sydney.  Rifle and machine gun shooting was continually practised during the voyage. The normal method was to shoot at balloons from the stern. Private Bobby Hughes shot with such concentration in a B Company shoot supervised by Captain Owen Cairns that he managed to damage some life raft capsules!!.

He served in Vietnam with the 7th Battalion, The Royal Australian Regiment, from the 16th February 1970 until his death on the 22nd April 1970.

… the fatal action in Vietnam …
The Commanding Officer was flown around the area of the contact in the direct support Possum, observing the extent of the bunkers and assisting with ammunition resupply. At this stage, a section of 4 Platoon, which had been in reserve, was ordered to assault the bunkers to allow the company to withdraw its wounded. Private Bob Hughes was mortally wounded at this stage. Second Lieutenant Metcalf recalled:

“Bob was unlucky, as I guess most are who get killed in action. He was almost behind me by about 15 feet when the VC fired an RPG at me (aiming at the sound of my voice). I didn’t see the rocket coming but distinctly remember the deafening explosion and the kick in the arse when the shrapnel hit me. Unfortunately for Hughesy, the rocket hit a tree just above me and to my rear, sending most of the shrapnel straight forward towards him. At the time of the rocket explosion we had no idea that he had been hit, as we were intent on firing on the bunkers to our front. A few moments later we were almost all out of ammunition and I then decided to withdraw, as we had little choice with only nine of us and virtually no ammo left. Also we had no radio as that was with the rest of the Platoon which, at the Company Commander’s insistence, was back guarding Company HQ,
I was therefore unable to provide any directions to the gunships on station which had ceased their covering fire once we commenced our assault. Since we had by this time expended almost one complete first line in an assault of no more than 50 yards, the VC must have thought they were being attacked by a complete company!

Thus, having got no closer than 30 yards to the nearest bunker, we withdrew. As we came back we found Hughesy lying unconscious with a small wound directly between and slightly above his eyes. I picked him up and carried him back. At no stage did he recover consciousness. He was medevaced a little later by one of the Sioux helicopters which came to bring us in some more ammo. His death had a profound effect on the rest of the platoon. When I returned to Australia I made contact with his family and still correspond with his mother. She, like most mothers,
took his death very hard and still bears the pain of remembering.”

BOb Hughes died of his wounds at 24 US Evac. Hospital, Long Binh .

His grave is within the Stirling North Cemetery, south east of Port Augusta in South Australia 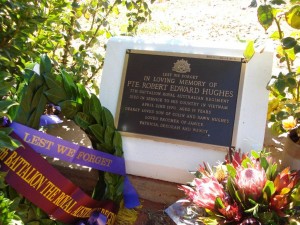