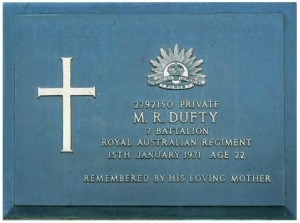 Milton Dufty was born in Kempsey, in the state of New South Wales, Australia, on the 5th September 1948.

At last light on 15 January a lie–up ambush of 5 Platoon B Company, led by Corporal ‘Rusty’ Hollings, situated 1 km south–east of the Dinh Co monastery at the base of Nui Da Dung, ambushed a group of twenty enemy. The enemy group approached from the south and were very well camouflaged. Two enemy were killed and six wounded. In the vigorous exchange of fire, Private Milton Dufty died of a gunshot wound he received to his chest. Corporal Hollings received fragment wounds to his left shoulder and Corporal Graham Roberts sustained fragment wounds to his left arm and the bridge of his nose. Lance Corporal John Costello sustained a minor wound to his buttocks. Corporal Hollings commended the bravery of Private Tony Krantis, the platoon medic who, exposing himself to fire, worked desperately to save Private Dufty. As the casualties were being Dusted–off, the enemy rejoined battle. This was short lived as the Commanding Officer flew over the contact in the direct support Possum. Since the lie–up position was compromised, armoured personnel carriers were used to extract the patrol and to return the two wounded soldiers for treatment. One of the enemy killed was identified as the commander of the Long Dat District Proselytising Section.

His grave (L1 – 18) is within the  Kempsey West Cemetery in New South Wales and is located in the Church of England area. 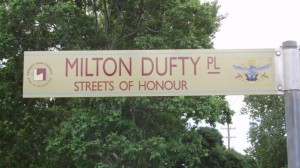