Just when I thought I was were keeping up with the modern world along comes this article on a new sport that will help develop skill sets for the modern soldier. 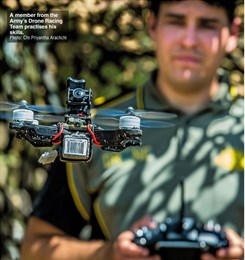 ARMY’S Drone Racing Team (ADRT) has raced admirably at their second hit out at the Aussie Opens conducted over three days recently in Picton, NSW.

First Person View (FPV) Drone Racing has been called the “next big thing” in motorsports which already includes cars, motorbikes and aerobatic aircraft. With FPV, racers control small radio-controlled quadcopters equipped with cameras that provide a live feed to goggles worn by the controllers.

The goal is to race in heats of four and complete the course as quickly as possible while avoiding obstacles.

The sport is being considered for major competitions where competitors may have a disability such as the Paralympics or Invictus Games.

Top placed from the Army racers was Cpl Zakariah Martin-Taylor flying under the tag WEDGE, placing 50th among Australasia’s best.
“This has been a fantastic event.

The amount of knowledge that I’ve learnt from this weekend will really improve my flying,” Cpl MartinTaylor said.

The crowd was interested in learning more about Army’s involvement in the sport with many commenting that they were impressed such a large organisation was investing so much effort into drone racing.

“Competitors love talking to the Army Drone Racing Team members and finding out about how drones are used within Army. Many had never considered Army before but they learn about how Shadow and Wasp and other UAS are used and about the ADRT and it piques their interest in the Service,” Lt-Col Joyce said.

“It’s attracting a new generation of potential soldiers to the ADF who are comfortable with technology, and Army’s involvement in these types of competitions is a real crowd pleaser.” The competition winner, 18 year old Thomas Bittmatta, echoed Lt-Col Joyce’s sentiments.

“It is awesome to see the Defence Force team at these events and joining the racing community,” he said.

“We first saw the ADRT at the 2017 Australian Nationals and seeing their progression in racing is mind blowing. I can’t wait to race against the ADRT again. I really hope other defence forces start something like the ADRT and make their own teams.” If you are interested in racing with the Army team, check out the Australian Army Drone Racing Team on Facebook